In Turn Here Sweet Corn: Organic Farming Works, I wrote about cross-pollination and the threat of genetically modified organisms.

If our sweet corn is cross-pollinated by neighboring field corn, it is not sweet nor is it marketable. Martin manages this threat by recording the dates of all the developmental stages for our crop, as well as the neighbors’ planting and pollen dates. He then adjusts his varieties and planting sequence by what the neighbors plant and when. But genetic contamination is impossible to avoid completely. When there are field corn–pollinated kernels in our sweet corn, they are visible; dark yellow kernels mixed in like polka dots among the small, tender sweet corn kernels. But now there is an even larger challenge and looming threat. 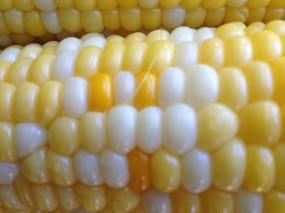 Cross–pollination/genetic-contamination in our organic, bio-color sweet corn seed breeding project in August, 2012. The three dark yellow kernels were cross-pollinated by field corn — 88% chance that it is GMO.

It is 1997, and our neighbors are experimenting with genetically modified field corn (GMO). We don’t want GMO traits in our organic crops, and there is no controlling the pollen. We know from firsthand experience how readily cross-pollination occurs. We are concerned that eventually it will become impossible to find seed and food that isn’t contaminated with GMO traits. — excerpt Turn Here Sweet Corn

I was concerned in 1997, but I couldn’t even imagine then that by 2012 the U.S. Department of Agriculture would report that 88 percent of corn raised in the United States is grown from what scientists now call transgenic seed (a.k.a. GMO, or GE for genetically engineered.) 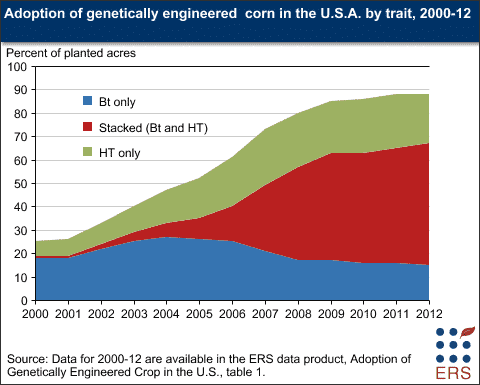 BT: Insect-resistant crops containing the gene from the soil bacterium Bt
HT: Herbicide-tolerant (HT) crops, developed to survive application of specific herbicides that previously would have destroyed the crop along with the targeted weeds.

As careful as we are about planting dates, cross-pollination in a corn-growing region is inevitable — pollen can travel long distances on wind.

Each kernel has it’s own silk. A pollen grain must travel down 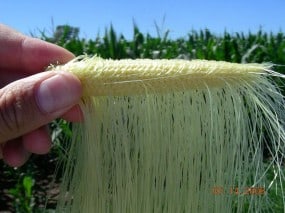 each silk to pollinate each kernel. One ear of corn can be pollinated from multiple plants.

And for those of us that wish to avoid eating GMO traits, the threat isn’t only from GMO field corn pollen. Many local, non-organic* sweet corn producers — YES, “people-corn”, not only “cow-corn,” and YES, even at local farmers markets — are now planting GMO sweet corn varieties.

I find that often when I ask the market sales person if their corn has GMO traits they say “no,” or “what is GMO?” But when I speak to the farmer I learn that it is a GMO variety. The sales staff don’t always know, and labeling is not yet required.

(*Organic farmers are not allowed to use genetically modified seed.)

*IMPORTANT – When buying ATTRIBUTE varieties, _ _ _ _ SEEDS, INC must have the waiver before seed can be released.  Contact us for waiver.

Was it clear to you from reading this description that Attribute Varieties are genetically modified with BT?

Would you like them to be labeled in the market so you can choose if you want to eat them or not?

How about this one?

*PERFORMANCE SERIES can only be shipped upon receiving your TECHNOLOGY LICENSE number.  We will send you the LICENSING AGREEMENT if you don’t have one already.

GMO BT sweet corn has been on the market for years, but the addition of herbicide resistant has make it “irresistible;” a grower can now use the same herbicide and sprayer on their field corn and their sweet corn — they don’t even have to rinse out the tank!

Do you want to eat sweet corn with Round-up herbicide and GMO traits?

Myself, I prefer organic butter and sea salt.

When I spoke with the seed vendor he told me that he had no idea that the Performance series would sell so well — he repeatedly sold out this spring. He added that even the Monsanto sales rep wasn’t expecting the high sales!

Genetic modification is an experiment not of our choosing. But we all are participants. It’s not if cross-pollination happens but when. There is no taking it back, and segregation in the field is not possible. It is a threat not just to our survival but also to the future of our genetic heritage and to nature itself.

Subscribe to Atina Diffley’s Blog, What Is A Farm?

Atina Diffley is an organic consultant (Organic Farming Works LLC), educator, public speaker, and author of the 2012 memoir, Turn Here Sweet Corn: Organic Farming Works, published by the University of Minnesota Press. Until 2008, she and her husband Martin ran the Gardens of Eagan, one of the first certified organic produce farms in the Midwest. One of her favorite things in the world is rain.

A lesson in entrepreneurship, a love story, and a legal thriller.

Read Atina Diffley's Blog: What Is A Farm?