History: The potato as we know it today, is the result of thousands of years of selection and cross breeding of wild potato species. It appears to have first been cultivated 4,000 to 7,000 years ago in the Andes mountains between Bolivia and Peru. From there it spread through South America and became a wide spread food crop, especially valuable in mountainous areas where little else would grow. The first potatoes came to Europe in the 1500’s. They were greeted with little enthusiasm, being considered poisonous and the cause of leprosy, until they reached Ireland where they quickly became a staple of for the poor. The Irish economy became so dependent on the potato that failure of the potato crop in 1845 brought about severe famine and emigration from Ireland. Potatoes did not become an important part of the English diet until the 18th century. Today potatoes rank in the top 4 principal foods worldwide.

Nutrition: In just 400 years, the potato has replaced grain as a basic source of nutrition in many nations around the world, Why? Because the potato is one of the best bundles of nutrition known to mankind. Its carbohydrate – to – protein ratio is ideal, and it provides significant amounts of Vitamin C, potassium, thiamine, and niacin. Since we don’t spray our crops with chemicals you can be comfortable serving them in nutrient rich skins.

The potato yields more nutritious food, more quickly, on less land and in harsher climates than any other major food crop!

The Greening of the Potato: If potatoes are exposed to light for too long the skin turns green. When this happens the toxin solanine is present. causing the potato to be bitter and toxic. Peeling deeply will remove most of the poison, but if more than half the skin is green it is best to throw the potato away.

Baked Potatoes: Preheat oven to 400°. Prick scrubbed potatoes with a fork. Bake one hour or until soft.

Campfire / Grill Potato Packets follow the Oven Fries recipe till mixed in bowl. Wrap potatoes in aluminum foil, and place over coals. Bake 20-30 min. depending on heat of coals. turn halfway through baking.

What has eyes but can not see? 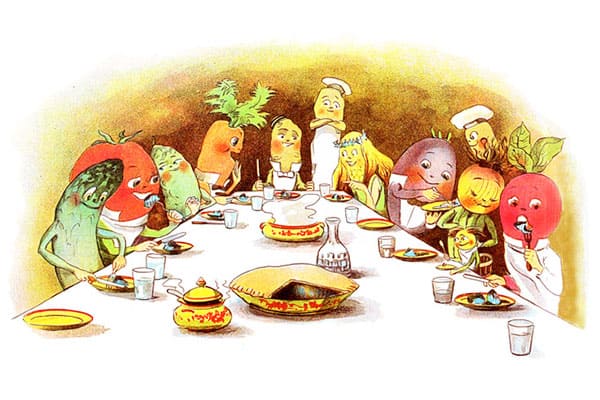